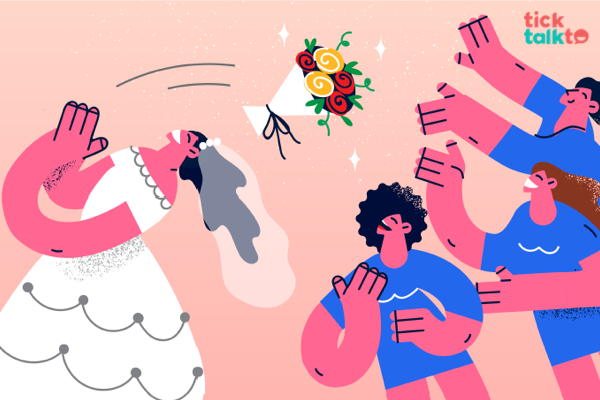 Sologamy – Saying “Yes I do” to oneself

“Fall In Love With Yourself, With Life, And Then With Whoever You Want”

We have heard about Monogamy (single life partner), Bigamy (two partners), and Polygamy (multiple partners) marriages which have been in existence since time immemorial. But Sologamy is the latest in-thing.  There have been instances that you might have come across, where a woman married Eiffel Tower, and she is called Mrs. Eiffel, where a man married his favourite pillow that was with him since his childhood, and he carries it everywhere. When Kshama Bindu1, a young woman from Vadodara, Gujarat took wedding vows with herself and said, “yes I do” the traditional Indian way, it caught everyone’s eye all over the country. This is called Sologamy, the act of marrying oneself, committed to oneself out of self-love till the last breath.

For many marrying non living things, or marrying oneself might sound like a bizarrely insane act. But if we try to look from their perspective, we will better understand that it’s all about falling in deep love and reciprocating the same whether with a nonliving object or with oneself. This is the latest trend that is picking pace slowly amongst the younger lot in the west and other parts of the world. Though this is the first case in India, there are several reports of self-marriage from other parts of the world too.

Sologamy is marrying oneself without an officiant or a partner of the opposite sex involved. This is also referred to as self-uniting marriage. The wedding vows are a little different than any regular marriage as the person is saying, “I do” to oneself. Wedding rituals remain the same to commemorate the sologamy wedding. Cultures may vary though.

Sologamy and Self Love

Some people support the argument that unless you love yourself, how can one love another human, marry that person and be happy in that relationship. Hence, one must love oneself and accept oneself with all the flaws and good things only then the relationship will be an enriching experience. Sologamy or Autogamy is an act of extreme self-love. It is a manifestation of self-love and independence where a person feels fulfilled & complete with one’s own company and doesn’t feel the need to have another human in life.

In other words, we can say that it is a safe game to play, where you invest your time, emotions, and energy in yourself and be happier than spending your whole life with someone you don’t love.

The legal status of Sologamy or Self-Marriage

The Hindu Marriage Act requires two people to participate in the wedding rituals and get hitched. In the absence of which the marriage doesn’t hold legal status. It is more of a cultural thing emphasising on self-love independence and self-sufficiency.

When did the trend of Sologamy begin?

It all started with a Dentist, Linda Baker who took the wedding vows with herself in 1993. It was the first-ever case of sologamy in the whole world, and a daring act indeed back in those days.

It’s very sad to see any relationship coming to an end. A person may wish to divorce oneself in a sologamy marriage then he/she is free to do it. The first report of sologamy divorce when a Brazilian model, Cris Galera decided to end her 90 days of self-marriage as she has found someone for her. Well, finally she could find someone worth spending her whole life with.

Why is Sologamy getting popular

In today’s world, where love is being catered to on digital platforms like Tinder and Bumble, finding true love is almost impossible. The fear of breakup, betrayal and trust issues are inevitable. Hence the younger generation is finding it rather easy to emphasise being self-loved and get hitched to oneself. As per social psychologists and relationship experts, all over the world, several factors are giving rise to the number of sologamy relationships.

Benefits of a Sologamy Relationship

Sologamy or self-marriage or say it like self-love is getting popular amongst the youngsters. This new kind of relationship comes with its own set of benefits which is more alluring than any relationship that involves two people.

No compromise with independence

One need not compromise on independence in a solo marriage as this is the first thing that people are scared of in a relationship. solo marriage gives you the freedom to safeguard your interests and still explore the world around you.

No fear of betrayal

One has the fear of being dumped and being left out in a relationship involving two people. But in a solo marriage, love feels like an eternal thing as one will not betray oneself. The longing for lifetime love will be fulfilled for sure in a solo relationship.

No compromises with comforts

In a typical marriage, the compromise begins with the changes in the basic needs, sharing the bedroom, other things, and basic style changes to fit the bill. In a solo gamy marriage, one need not compromise on the comforts of life.

No fear of dealing with in-laws and extended family

Especially women are obsessed with the fear of dealing with the in-laws and the other family members. Family politics and drama is not just their cuppa. Many opt for solo marriage to avoid these glitches as it affects their mental well-being.

Many choose not to marry just as they think they are not meant for perfect family life as other aspects of life seem to be more important for them. But remaining unmarried attracts everyone’s negative attention and one becomes the topic of discussion. Hence solo gamy allows them to start a new journey with themselves.

Sologamy is a new way of life

For whatever reasons, some are in support of this whereas sologamy has received the backlash of many. Any relationship is all about falling in love with each other and growing together. Then what is wrong with falling in love with oneself and growing with oneself accepting one’s weaknesses and strengths? Let’s think it over without being biased. After all, self-love Is not selfish. You cannot truly love another until you know how to love yourself.”

If you are struggling with your relationship, you can seek online counselling and therapy on the TickTalkTo App from top rated therapists like Era Sharma, Mihul Narad, Thasneem Kauser, Sukhmani Kaur, and Savita Hoskoti. Download the app and start feeling better now.